There’s no magic in painting eyes on a block of pine unless its first carved into the shape of a creature.

Consider the creative and technical challenges of carving a puppet- the necessary articulation and balance while looking and moving like the character it will represent. Fitness to purpose is very subjective and difficult to judge before it is complete: does it elicit the desired emotional response as part of a story? Does it fit in with the rest of the puppet cast?
Technical and creative activities in authoring are often too intertwined to have obvious boundaries. Separating them too rigidly risks having critical issues and concerns surface only after a project is complete and viewed in context. Worse, opportunities to capitalize on ideas inspired by the interplay of the two domains can be lost.
I recently finished a project in which the the creative and technical activities were purposely separated. Looking at this project reveals the individual processes because they were in separate stages.

There was a very specific project brief that defined the functional specifications and some methods that had to be used. So I started by creating some code and some very simple graphics to fulfill the requirements. This might equate to roughly carving out the head, torso and limbs. The large features get worked out – brow and chin, feet and hands, but not yet mouth or fingers. Lots of whittling marks. 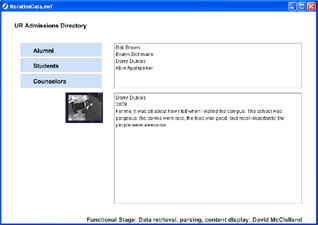 The visual arrangement is now considered in terms of the task to be performed. I ask myself questions like: How are they going to do task y? Or, better: “How do they think they are going to do it?” This is where a background in Industrial Design is very helpful to me. I have studied how people do things in the physical world for some time, practicing in the field through the mid-90’s. A carefully composed visual display is crucial. When someone “just knows” how to use something “intuitively” it has tapped into a mental model of how the target audience thinks things should happen. What really happens behind the scenes in a database or a web application is irrelevant, and often quite different from the mental model used or represented.

This is where I paint the eyes. The animation is not the centerpiece any more than Pinocchio’s eyes are – it’s job is to connect the functions and interface and evoke an attitude or personality. It awaits its master to bring it to life: the user.